Two members of Millwrights Local 1056 (Waupaca, WI) were hailed as heroes for saving a man’s life from Fox River in Green Bay, WI. In March, an individual attempted to jump an open span of the Ray Nitschke Memorial Bridge (a twin-leaf bascule bridge) and fell into the water below.

Two construction workers, Scott Engle and Dewayne Schude, were performing maintenance work on the bridge when they heard someone screaming for help. They noticed a man struggling to stay afloat in the river’s frigid waters. They immediately contacted 911, and without hesitation, Engle and Schude made their way down to a ledge near the river. They pulled the man to safety just as the paramedics arrived.

In a special ceremony hosted by the Green Bay Metro Fire Department on June 16, 2021, Engle and Schude received the Outstanding Citizen Award for saving the man from drowning. This award recognizes citizens for performing outstanding deeds or heroic acts of service. At the ceremony, Engle and Schude received their awards with their friends, family, and coworkers in attendance. “Short of Scott and DeWayne’s actions, we are quite sure that the person would not have made it to shore and thereby they saved this person’s life,” stated Fire Chief David Litton during the award ceremony.

“It was the right thing to do,” Engle explained. The pair did not draw too much attention to what had unfolded, believing it was something anybody would have done. “We went right back to work after that. We had a schedule to keep!” Schude laughed. He did not think much of the incident until two months later when he received an invitation from the fire department to be acknowledged for his heroic actions.

Engle and Schude have known each other since grade school, and both have been members of Local 1056 for over 30 years.

Due to patient privacy, Engle and Schude do not know the man’s current health status but wish him a safe and fast recovery. Stories like theirs exemplifies our members’ bravery and compassion on and off the jobsite. 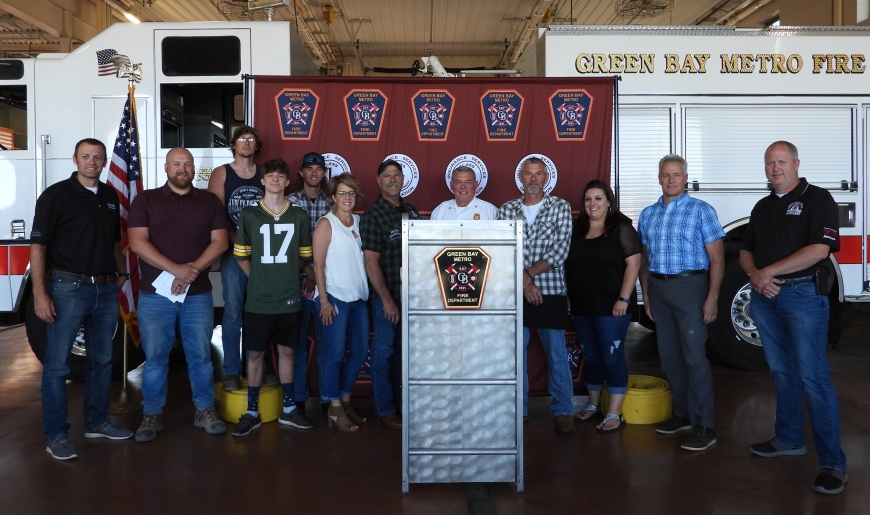